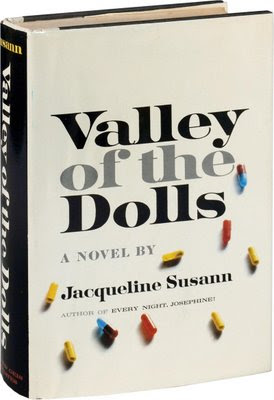 1 VALLEY OF THE DOLLS, by Jacqueline Susann.

2 THE ADVENTURERS, by Harold Robbins.

3 THE SOURCE, by James Michener.

5 THE DOUBLE IMAGE, by Helen MacInnes.

7 THE EMBEZZLER, by Louis Auchincloss.

8 I, THE KING, by Frances Parkinson Keyes.

9 THOSE WHO LOVE, by Irving Stone.

10 THE DETECTIVE, by Roderick Thorp.

As a longtime book reader, collector and seller, I am fascinated by whatever happened to bestselling authors. Above you see the NYT Bestsellers from this week in 1966. Let's take a look at them, shall we?

1/2--Right at the top we see Jackie Susann and Harold Robbins, neither truly great storytellers but both among the most successful authors of the mid-century. Why? Sex. By those point, there were plenty of books that had it but few yet from major publishers. These two authors could both be counted on to deliver. Having been an actress once herself, Ms. Susann became an immensely popular and opinionated talk show guest. Although she beat cancer once in the early sixties, it reared its ugly head again and took her a decade later. She had only published four novels in her lifetime.

Robbins, by contrast, published 24 in his lifetime and, like Susann, several posthumous ones. His books were considered far too graphic in the late forties but society's permissiveness had passed him by in the end leaving his final works to seem a bit quaint and almost nostalgic in style. He would die of heart failure in 1997.

3--By contrast, James Michener was a Pulitzer prize winner whose works were generally quite thick and history-based and yet quite readable and immensely popular. His book THE SOURCE was often bought for schools in the eighties. Michener would have more than a dozen more bestsellers before he, also, died in 1997.

4--James Clavell, probably best remembered as the author of SHOGUN, might be called "Michener Lite." Originally a scriptwriter, TAI-PAN was only his second novel. He would have four more in that same unofficial series--along with a number of unrelated books--before his death from a stroke in 1994.

5--Helen MacInnes--She had been a popular writer of espionage thrillers since the War. After 1966, she would continue to ride the bestseller lists right up until her 1985 passing.

6--Adela Rogers St. John--A fixture on the Hollywood scene since the Twenties, she had been a reporter, a screenwriter and a professional celebrity in spite of only a handful of books published. She lived almost three decades more but only did a handful of additional books, too.

7--Louis Auchincloss--A prolific author, he had ten books prior to his 1966 hit and dozens more afterwards, both fiction and non-fiction, right up until his death in 2010.

8--Frances Parkinson Keyes--Already 80 years old by the time her 1966 book was on the list, it was one of the last of a long string of old-fashioned, conservative and--looking back--politically incorrect novels set in the South. She is little remembered by the casual reader, today.

9--Irving Stone--LUST FOR LIFE and THE AGONY AND THE ECSTACY were his two classics but any book by him seemed pre-guaranteed a spot on the Bestseller lists! His last book came out in 1985, three years prior to his death.

10-- Roderick Thorp--Thorp was a reasonably successful crime novelist. Like many bestsellers,his 1966 book, THE DETECTIVE, became movie a couple of years later, starring Frank Sinatra. Little known fact is that its later sequel, NOTHING LASTS FOREVER, was the basis of DIE HARD!! So basically Bruce Willis is playing the same character played by Sinatra in the 1968 film!

Of these authors, without checking, I'd say one could walk into any (of the few remaining) bookstores and find Michener and Clavell but not necessarily the others. Even those in print would not likely be stocked in stores these days.