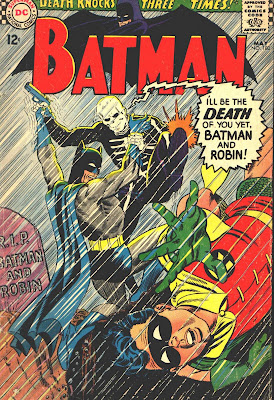 This was my very first BATMAN comic book as well as the comic book that I consider my first as an actual "collector" as opposed to just a casual reader. Comics writer and historian Mark Waid once told me it was his first, also. He added that since this issue--although dated May of 1966--was most likely on the stands in February or March...with the TV show having hit the airwaves in January...it was probably the first for many readers as Batmania reached its early peak!
This riveting and atmospheric cover is a rare outing on the character for GREEN LANTERN and ATOM artist Gil Kane, smoothly inked by artist Murphy Anderson. Sadly, the insides, while offering an interesting and creepy new character in a pretty good story by Robert Kanigher, are presented with typical "Bob Kane" art of the period as ghosted by Sheldon Moldoff and Joe Giella.
Doesn't matter though. To legions of comics fans, this cover represents much more than the story itself. If you were there, the "Death Knocks Three Times" cover is the ultimate in comic book nostalgia!
Posted by Booksteve at 1:25 AM