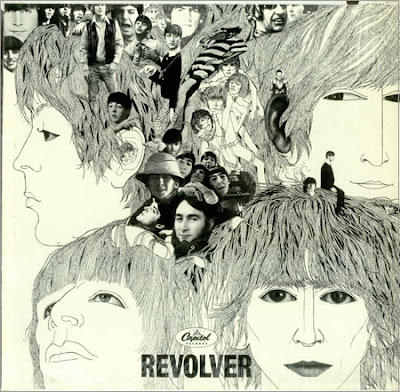 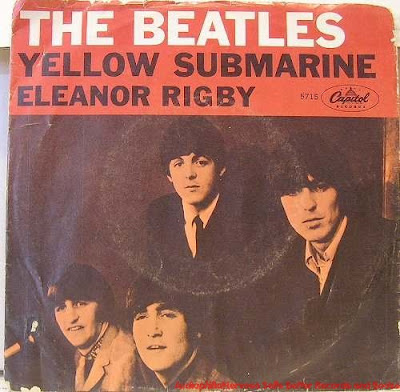 I came late to the Beatles, my first record by the Fab Four being their final single release in 1970. From that point on, though, I was hooked. I spent much of the seventies gathering up all of their albums and singles and even my first bootlegs. My favorite overall album turned out to be REVOLVER--originally released in 1966.
REVOLVER, with its highly unusual art collage cover, was the last album released in the US that differed in any substantial way from its UK release. It had been standard practice for Capitol Records, the boys' US distributor, to drop a few songs from each stateside release. Eventually they had enough leftover songs to create a whole new album, YESTERDAY AND TODAY, that was only released here. Three of the songs on that album, in fact, had been lifted from REVOLVER and debuted here two m
onths before the rest of the album. They are DOCTOR ROBERT, I'M ONLY SLEEPING
and AND YOUR BIRD CAN SING.
When REVOLVER itself debuted in the US in late summer, it was not what was expected. In just two and a half years on the international radar, the Beatles were leaving the 3 minute pop song behind in favor of deeper lyrics and experimental sounds. This was the US track listing:
TAXMAN--Marking the first time a George Harrison song opened a Beatles album, this song was George's pre-spiritual rant about the economic situation in the UK.
ELEANOR RIGBY--A lovely melody played by string quartet underscores some of Paul McCartney's most poetic lyrics dealing with sadness and loneliness in a simple but universal way. This was far from the typical pop music the band had been putting out before now.
LOVE YOU, TOO--Harrison appears again already, this time with early usage of Indian instrumentation. The song isn't that memorable but it's influence would spread.
HERE, THERE AND EVERYWHERE--One of Paul's most stunningly beautiful vocal performances, harmonizing with himself on double track. Again, by no one's definition was this rock and roll. The Beatles were past the point of allowing their music to be labeled.
YELLOW SUBMARINE--a silly children's song with goofy sound effects must have seemed thoroughly out of place at this point on the LP but, of course, this became one of Ringo's signature songs and would lead to the classic animated YELLOW SUBMARINE feature.
SHE SAID, SHE SAID--One of the earliest songs admittedly inspired by being high, this is my favorite song on REVOLVER and a harbinger of the psychedelic movement that would become more prominent over the next few years.
GOOD DAY SUNSHINE--This was McCartney said to be imitating the feel good style of songs by groups like The Lovin' Spoonful. Here, as elsewhere on the album, the importance of Producer George Martin as "fifth Beatle" becomes more notable both for his arrangements, instrumentation and even musicianship. He plays piano on this tune.
FOR NO ONE--This amazing baroque number was an early instance of the group's gradual disintegration. Although Ringo played drums, this was otherwise just Paul on multiple instruments with a French horn player and a genuinely heartbreaking tale of love and loss.
I WANT TO TELL YOU--George again, unprecedented to this point. His songwriting would mature quickly. Ultimately he would turn out to be the most successful Beatle when their solo projects began coming out of the gate.
GOT TO GET YOU INTO MY LIFE--A prominent brass section appears on this song, again with a strong vocal from McCartney and said to be one of Lennon's favorite's of his partner's performances. The horns presaged and more than likely influenced later groups such as Chicago and Blood, Sweat and Tears.
TOMORROW NEVER KNOWS--If a listener had gotten this far they would have definitely noted the continual musical variations of the cuts. In retrospect, absolutely nothing here could be described as rock and roll. It was also hard to dismiss with the "yeah, yeah, yeah" and Beatle "wig" humor of recent years. Then....listeners heard TOMORROW NEVER KNOWS...and there was no looking back. With lyrics quoting from THE BOOK OF THE DEAD and music like no one had ever heard before, this was John Lennon telling the world not to pigeonhole the Beatles. And more importantly, not to pigeonhole John Lennon. You didn't even NEED drugs to turn on to this song. Even in its familiarity today, it stuns when one really listens to it.
As REVOLVER came out, the former moptops were already changing their look and their fashions, both reflecting society and influencing it. REVOLVER was a new type of music. SGT. PEPPER was waiting in the wings to change it all again.
Posted by Booksteve at 10:42 PM