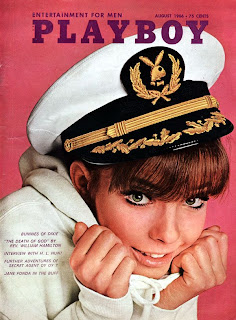 At seven, I was, of course, a little young to be reading PLAYBOY but it sure was quite a banner year for their much-vaunted interviews. This was the year when African-American writer Alex Haley interviewed American Nazi George Lincoln Rockwell, a scene dramatized years later in the sequel to Haley's ROOTS with James Earl Jones as the interviewer and a rare TV turn by Marlon Brando as the interviewee. The only person on this list with whom I was not familiar was Norman Thomas. Looking him up, I see he was a six time unsuccessful candidate for the US Presidency under the Socialist Party of America.
Posted by Booksteve at 7:05 PM