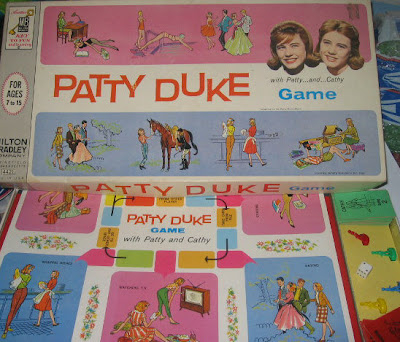 THE PATTY DUKE SHOW was one of the most memorable sitcoms of its day. Essentially a TV version of the Disney film, THE PARENT TRAP, it doubled as a vehicle for the brilliant former child actress who had scored so winningly as Helen Keller in THE MIRACLE WORKER. In the show, as explained in its memorable theme song, Patty plays lookalike cousins...but cousins who are completely different in most ways. She actually managed to play the roles so well that many thought they really were two separate girls. THE PATTY DUKE SHOW game came out in 1966, the last year the show aired new episodes before a lifetime of reruns that continues today.
Posted by Booksteve at 3:28 PM