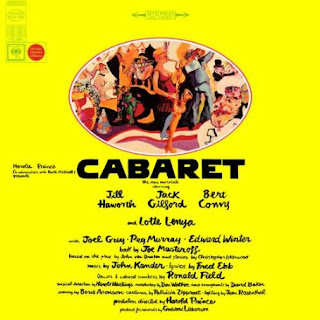 CABARET was a huge Broadway hit with songs by Fred Ebb and John Kander. Actress Jill Haworth created the role of Sally Bowles, a British entertainer in pre WWII Germany. Later game show host Bert Convy was the young American man in her life. (In the later film version, those countries would be reversed)
Jack Gilford and Lotte Lenya not only co-starred but took the Tony nominations for best Actor and Actress.
Underneath it all was Joel Grey in his career-defining role as the creepy, enigmatic emcee. Grey would be the only one of the original cast retained in the 1972 film version which became a signature vehicle for Judy Garland's daughter, Liza Minnelli.
Posted by Booksteve at 7:11 PM