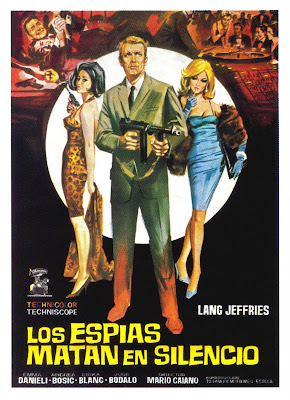 Lang Jeffries is a now forgotten Canadian actor who co-starred in a TV series about firefighters called RESCUE 8 at the end of the fifties. He was married to actress Rhonda Fleming for a while. Like many hunky TV stars of the period, he went to Europe and found a whole new career. Jeffries may be best-known to genre fans for his starring role in MISSION: STARDUST, the only movie based on the long-running German sci-fi pulp hero. Here he is in one of about a zillion relatively interchangeable Eurospy thrillers.
Posted by Booksteve at 5:20 PM