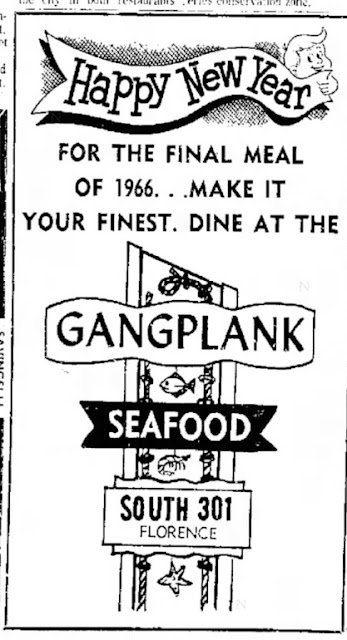 Posted by Booksteve at 9:12 PM No comments:

The Hollywood Deb Stars of 1966 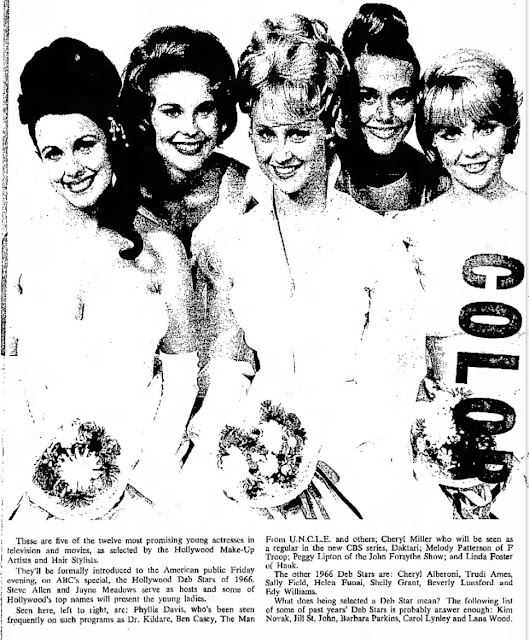 "Deb" as in "debutante." For years, Hollywood would have these "coming out" events, offering up a bevy of young starlets of whom big things were predicted. In 1966, the event got its own television special.

How correct were the prognostications?
Meet the 1966 Deb Stars:

Phyllis Davis had a long career in exploitation films, TV guest spots, a regular role on VEGAS and a long affair with Dean Martin. Died in 2013.

Cheryl Miller popped up a lot in family friendly fare such as several Ivan Tors productions--including a long run as a DAKTARI regular. Her credits end in 1980.

Melody Patterson famously lied about her age and was just a teenager when she began her memorable role on F TROOP. She was later a popular entertainer for the troops but her acting career fizzled. She passed in 2015.

Peggy Lipton was a couple of years away from her iconic MOD SQUAD role. Famously and controversially married to Quincy Jones, she returned to episodic TV years later on TWIN PEAKS.

Linda Foster was already a TV regular on HANK in '66 and continued to guest on shows through the early 1980s. Along the way, she married Dr. Ben Casey and M*A*S*H's Col. Flagg--Vince Edwards and Edward Winter.

Sherry Alberoni did the usual TV guest route, some cheesy horror flicks, and ended up a successful cartoon voice actor, most notably as Wendy on SUPER FRIENDS and Alexandra on JOSIE & THE PUSSYCATS.

Sally Field was easily the champ here, having already starred in GIDGET. Waiting in the wings were three seasons of THE FLYING NUN and then a long, Oscar-winning career in major movies ranging from SMOKEY & THE BANDIT to NORMA RAE and SPIDER-MAN (as Aunt May of all things!)

Trudi Ames played teenagers in movies and TV shows throughout the decade but then seems to have left show business.

Helen Funai appeared on soaps and sitcoms but also entertained as one of Dean Martin's Golddigger spinoffs, The Dingaling Sisters.

Edy Williams famously married and divorced breast fetishist and cult filmmaker Russ Meyer and became somewhat famous for appearing nude or nearly nude at many celebrity events from Cannes to Hollywood for many years!

Beverly Lunsford is still remembered for her early acting roles but lists only two more credits after being a 1966 Deb Star. 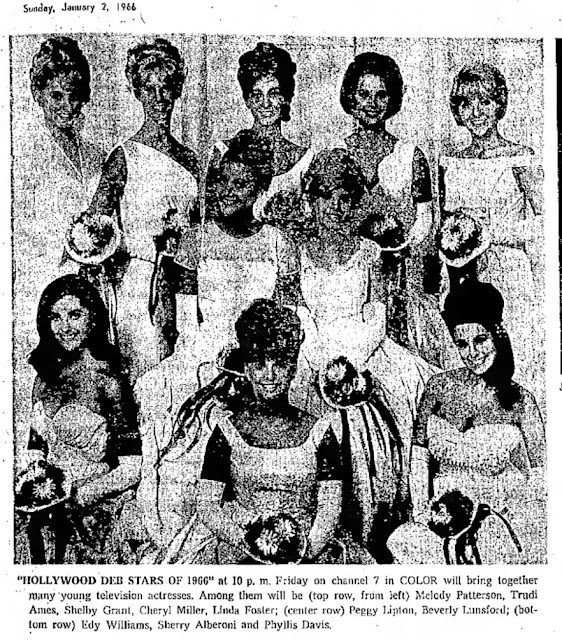 Posted by Booksteve at 8:19 PM No comments:

Here in the Ohio Valley, '66 was the first year of FROZEN Skyline Chili, available not just in the city's numerous chili parlors but now in supermarkets for you to heat and eat at home anytime the mood strikes you. Cincinnati chili--for those who don't now--is a unique experience. It's a thin brown sauce with finely chopped meat and a mix of spices that includes such ingredients as chocolate and/or cinnamon. It's served on coney islands with shredded cheddar cheese or over spaghetti with the cheese, optionally with beans and/or onions.

Posted by Booksteve at 8:37 PM No comments: