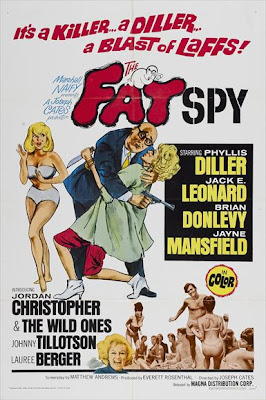 Phyllis Diller was surprisingly big in 1966. Jayne Mansfield was, too, but in a different way. She was pregnant. Comic Jack E. Leonard (AKA "Fat Jack") was always big. He plays a dual role here. Former big star Brian Donlevy, rumored to have a drinking problem, seemed to be taking any roles he was offered at this point.
It looks and no doubt was ultra-cheap and it yet it has an enjoyable feel to most of the proceedings along with some pretty good music. The plot is superfluous in this type of film but deals with the search for a fountain of youth.
Posted by Booksteve at 8:04 AM