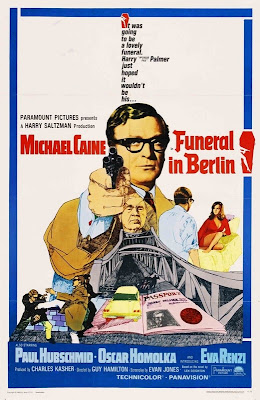 Michael Caine was hardly in the typical Bond mode as bespectacled working class spy Harry Palmer but he played the character in three films during the spy craze and then revisited the role in two more films three decades later. Based on the novels of Len Deighton, these were a bit more serious than most of the 007 adventures--more akin to FROM RUSSIA WITH LOVE than to GOLDFINGER.
THE IPCRESS FILE, FUNERAL IN BERLIN and THE BRAIN defined Michael Caine's early success but, unlike Sean Connery, he was kept from being typecast by his amazing performance as the Cockney rake, ALFIE, that same year!
Caine and Connery would team up nearly a decade later for director John Huston's memorable THE MAN WHO WOULD BE KING.
Posted by Booksteve at 3:19 PM