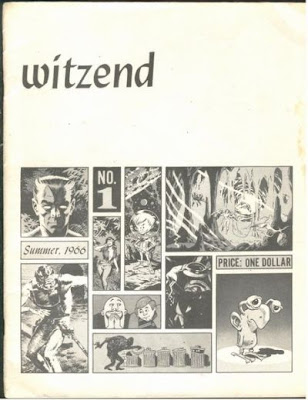 Fed up with corporate interference with his work, comic book artist Wally Wood decided to publish his own magazine without any editorial interference. The result was a legendary small print run magazine whose first issue appeared in 1966--WITZEND.
Over the years, Witzend would become an outlet for old and new work, less traditional work and downright important comics pieces such as Wood's Wizard King and Steve Ditko's Mr. A.
Among the creators whose work appeared were Jeff Jones, Al Williamson, Archie Goodwin, Reed Crandall, Harvey Kurtzman, Vaughn Bode', Richard Bassford, Bill Pearson and many more.
Posted by Booksteve at 12:05 PM