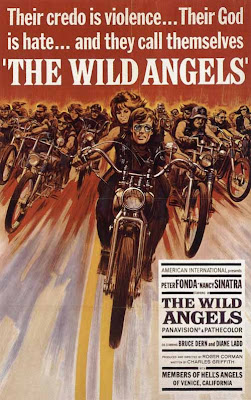 Roger Corman took what would amount to an All-Star cast in retrospect and created not the first but certainly one of the most influential motorcycle gang movies with '66's THE WILD ANGELS. With Peter Fonda, Nancy Sinatra, Bruce Dern and his then-wife Diane Ladd, familiar TV faces like Buck Taylor and Norman Alden, up-and-comers who never quite made it past cult stage such as Michael J. Pollard and Gayle Hunnicutt and even fifties starlet Joan Shawlee. Future director Peter Bogdanovich even has an unbilled cameo.

There would be scores of cycle flicks over the next decade with Fonda ultimately epitomizing the genre with EASY RIDER.
Posted by Booksteve at 5:44 PM