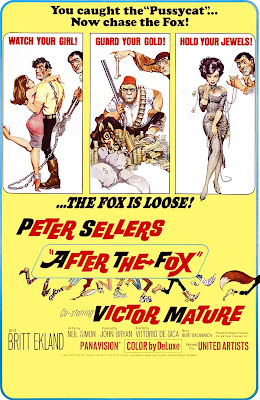 Having established himself in the UK first on radio's GOON SHOW and later in a series of films showing his versatility as an actor, Peter Sellers found himself an international star by the time 1966 rolled around. His major vehicle that year was AFTER THE FOX, a comedy caper about a master thief. The picture was written by Neil Simon, directed by Italian legend Vittorio De Sica and co-starred Seller's new wife Britt Ekland. Although it was one of his better films of the late sixties, the best parts were the Burt Bacharach theme song--a catchy tune sung by Peter with Graham Nash and the Hollies--and the film poster, painted by Frank Frazetta!
Posted by Booksteve at 9:38 AM