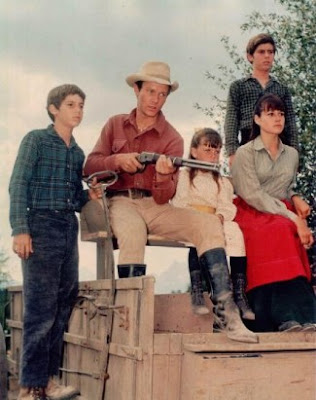 Known as WILD COUNTRY almost up until its actual debut, one highly touted show of the 1966 season was THE MONROES. THE MONROES was the story of an orphaned family trying to make it on their own in the wilderness, big brother and sister essentially taking over the parental roles. Micheal Anderson, Jr. starred along with Barbara Hershey.

Anderson, son of the film director of the same name, was a familiar TV face both before and after the series. Perhaps his biggest role was as a villain in 1976's LOGAN'S RUN.

Hershey was briefly a hot property after the series. In the next decade, she would become a figure of some controversy when she took up with actor David Carradine and changed her name to Seagull after claiming the spirit of one entered her body. She would, however, survive it all and give a number of award-winning performances over the years since THE MONROES.

The series itself, although it remains nostalgically popular, ran only one season.
Posted by Booksteve at 7:41 AM