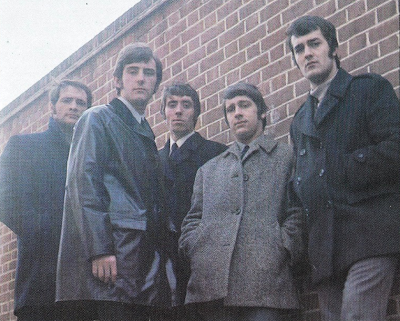 1966 was not exactly the best year for the Moody Blues. Their biggest hit, "Go Now," was a couple years behind them. The group--consisting of (l to r in top photo) Mike Pinder, Denny Laine, Clint Warwick, Graeme Edge and Ray Thomas had a reputation of always being rather solemn looking in photos. By 1966, they probably weren't smiling because they weren't happy. Both Denny Laine (later with Wings) and Clint Warwick left (as did Warwick's brief replacement. The group decided to call it quite toward the end of the year. Then Pinder brought in John Lodge who had worked with he and Ray Thomas in an earlier band. Eric Burdon from the Animals reportedly recommended Justin Hayward. The reformed group gathered in November of '66 and began working on a new style rather than continuing to do blues covers and newer blues songs. It would be a year before they released DAYS OF FUTURE PASSED, practically inventing symphony-style Prog Rock. The group has continued with Lodge and Hayward ever since with drummer Edge still with them also. 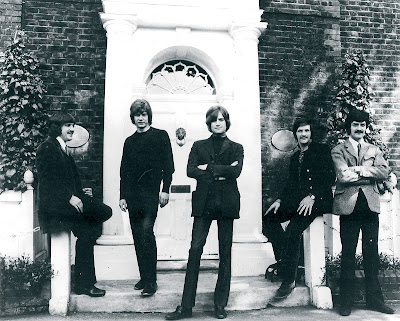