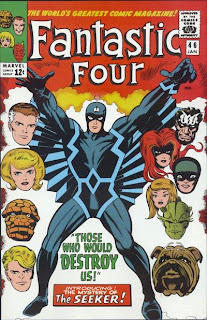 Today is being celebrated as the fiftieth anniversary of the FANTASTIC FOUR comic book! When pressed, I will generally declare FF as my all-time favorite comic book. In 1966, they not only had their own Hanna-Barbera TV cartoon but the book itself was on top of its game! Stan Lee. Jack Kirby and Joe Sinnott were producing the title with Kirby's imagination literally working overtime. Above is the January, 1966 issue (on stands in November on 1965) which features the debut (after several teasing issues) of Black Bolt and The Inhumans. 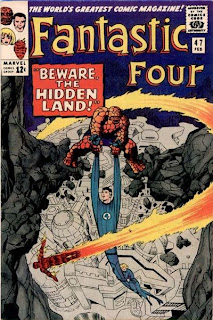 Here the Inhumans get trapped in the gigantic, impenetrable dome that will shield their Great Refuge from the world in a storyline that will literally last the next year as a subplot in the book as the storytelling becomes more and more complex. 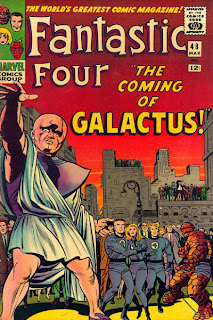 Over the next three issues, Kirby creates "God" as a super-villain and takes Marvel cosmic without ever looking back, throwing in the unexpected creation of the Silver Surfer. Even Stan Lee admits that he had no idea who this guy was as no one had mentioned him before. 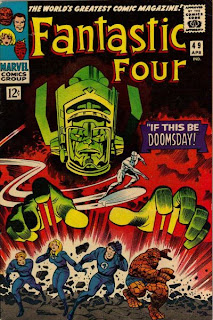 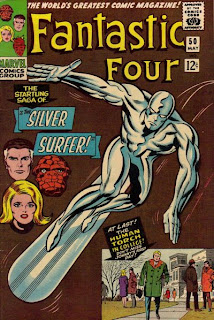 As the Galactus saga winds down, the more human side of the FF emerges again as Johnny Storm, the Human Torch, goes to college. 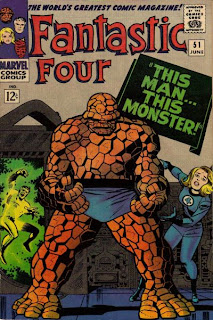 This issue is generally considered to be the FF's masterpiece of masterpieces, a simple tale of men and monsters and what really constitutes which is which. 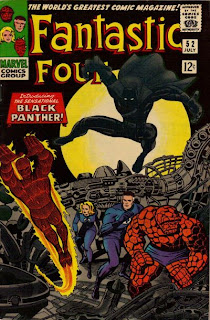 In the next two issues, the first major black hero, the Black Panther, an African price turned superhero, arrives complete with a background of a highly technological country and its ultra-rare element, vibranium, all of which will underly scores of plotlines and plotpoints to come over the years as Marvel mines the richness of these early issues. 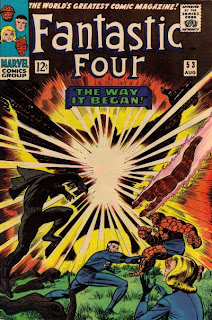 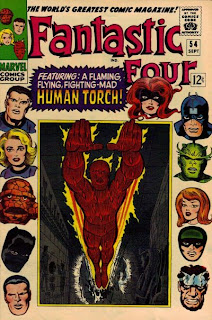 Okay, now this was the very first issue of FANTASTIC FOUR I ever bought. Although it's the September issue, I took it on our vacation to North Carolina in July that year and read it endlessly! It introduced me to so many concepts from this title that I felt overwhelmed. I still think the cover showcases some of the very best of the Kirby/Sinnott art from that period. 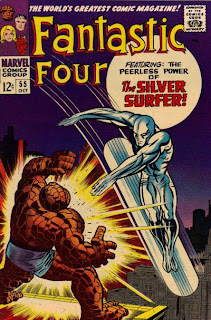 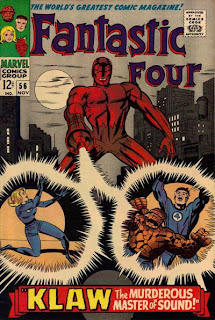 This was one of the last of the "in one" storylines from Marvel as the continuity was growing at an amazing scale by this point. Even then, Klaw was a returning villain from a few issues earlier but now transformed into something more...as Kirby had transformed Marvel during that same period. 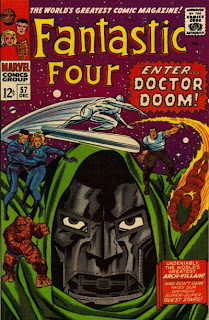 These next few issues were an absolute tour de force for sheer over-the-top superheroic melodrama as well as serving as my introduction to the megalomaniacal genius of Dr Doom! In this series, Doom manages to steal away the Silver Surfer's power and surfboard for himself. What could have been a silly storyline in anyone else's hands plays out in a majestic, almost Shakespearean tragedy that nonetheless includes the freeing of the Inhumans at long last! 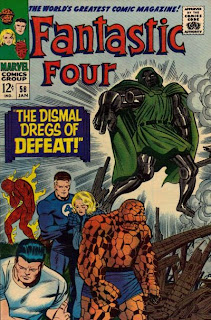 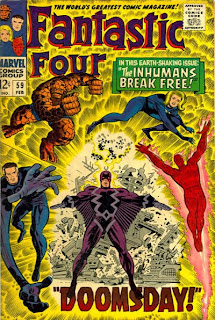 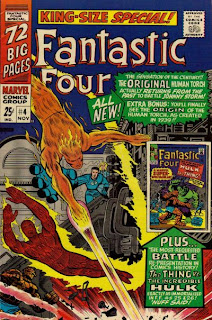 Also out this year was this FANTASTIC FOUR ANNUAL which i remember getting at Woolworth's while shopping with my mother. I also distinctly remember it introducing me ti the word "original." I had only just learned the word "origin" and presumed it must somehow be related. In this case, it was referring to the original Human Torch whose appearance here, along with reprints of much earlier FF issues, only hinted at the vast backstory of Marvel Comics that I was still to learn as time went on.

Posted by Booksteve at 1:32 PM