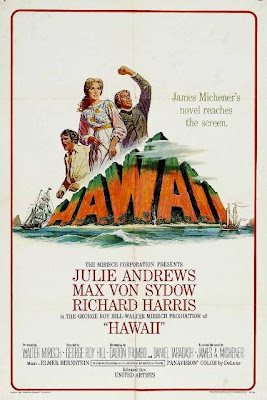 HAWAII, based on just a chapter of James Michener's massive novel, was at three hours, the biggest grossing movie of 1966. The basic plot dealt with a Reverend taking his new young bride to the islands to work as missionaries. 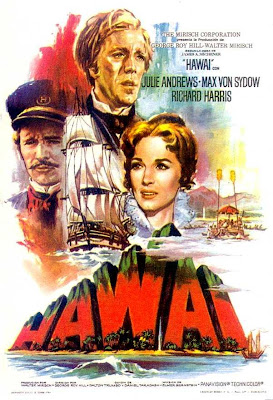 Still rolling with the success of MARY POPPINS and THE SOUND OF MUSIC, Julie Andrews played the bride. Here husband was Euro-favorite max Von Sydow, fresh off his somewhat controversial appearance as Jesus in THE GREATEST STORY EVER TOLD.

The rest of the cast list is, at least in retrospect, amazing. Richard Harris (later Dumbledore!), Carroll O' Conner (later Archie Bunker), Gene Hackman, former Von Trapp child Heather Menzies, Michael Constantine (appearing next month at the Mid-Atlantic Nostalgia Convention) and, believe it or not, an uncredited Bette Midler in her her first film as a ship's passenger!

HAWAII was directed by George Roy Hill who also directed a number of my favorite films including A LITTLE ROMANCE, THE STING and THE WORLD OF HENRY ORIENT. Screenplay is credited to the formerly blacklisted Dalton Trumbo.

HAWAII was one of the last of the great "event" films with reserved seating, overtures, intermissions and such.
Posted by Booksteve at 9:35 AM