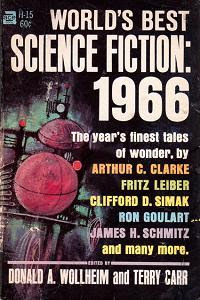 This volume came out in 1966 and while the rest of the stories are more or less forgotten today except by true SF buffs, the gem is Harlan Ellison's '"Repent, Harlequin,' Said the Tick-Tock Man." Ellison was already well on his way to becoming one of the most lauded and yet controversial science-fiction writers of all-time.
Also in this collection were Fred Saberhagen and Ron Goulart, both of whom would become favorites of mine in the seventies, and Clifford D. Simak, whose stories I would learn through their fifties old-time radio adaptations.
Posted by Booksteve at 6:25 AM