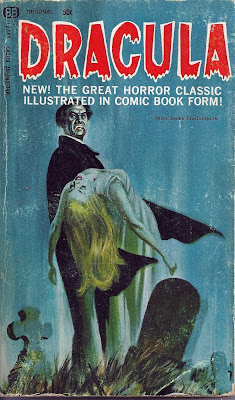 ORIGINALLY POSTED AT BOOKSTEVE'S LIBRARY--10/09
Ballantine Books had been successfully reprinting comic books in mass market paperback form going back to the original MAD collections of the late 1950's. By 1966, with monsters at an all-time peak of popularity, Ballantine went back to Bill Gaines' well to publish several volumes of classic horror and sci-fi tales from EC. The publisher probably assumed that the horror comics so publicly maligned just a decade earlier were now nostalgic and safe since Warren's CREEPY was using many of the same artists in even more explicitly edgy tales every month on America's newsstands. Begun in 1964, CREEPY was initially edited by Russ Jones.

I'm not sure if Ballantine approached Jones or Jones approached Ballantine but in 1966, one of the first American books that could legitimately be called a graphic novel appeared--DRACULA. Russ Jones packaged the book with a somewhat unconnected introduction by Christopher Lee (which is not even hyped on the covers so what was the point?), a pretty faithful adaptation of the original Bram Stoker novel done by CREEPY contributors Otto Binder (best known for his work on the original CAPTAIN MARVEL and later the LEGIO OF SUPER HEROES) and Craig Tennis and with impressive artwork by Alden McWilliams. 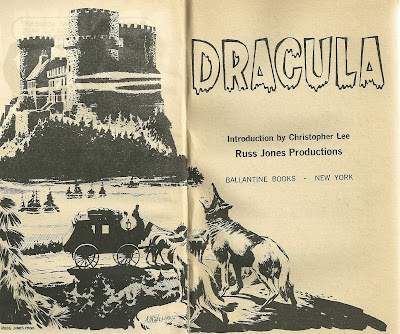 Long a favorite unsung artist, Al McWilliams had also been working for Warren as well as doing a lot of unsigned work for Gold Key Comics. In the 1950's he had done a marvelous sci-fi newspaper strip called TWIN EARTHS. McWilliams had a very clean style reminiscent of EC's Al Williamson (in his later

Since DRACULA is made up of a series of letters, journal and diary entries, the writers here logically take a more straightforward route of telling the tale while maintaining the episodic feel quite well. We all know the story. Jonathan Harker makes a deal with Count Dracula for some real estate in England. Upon his arrival, Dracula's interactions with those in Harker's circle lead to anguish, pain and death until Dr Seward and Professor Van helsing determine that the Count is actually an undead vampire.

Visually, the Count bears more than a passing resemblance here to actor John Carradine who had memorably appeared in the role in the Universal classics HOUSE OF FRANKENSTEIN and HOUSE OF DRACULA two decades earlier. In 1966, the very same year that this version of DRACULA was published, Carradine cheapened those memories by recreating the role in the Grade Z horror that was BILLY THE KID VS DRACULA!
Posted by Booksteve at 11:15 AM