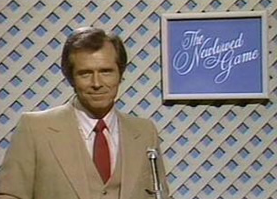 Love it or hate it, THE NEWLYWED GAME began in '66 and has pretty much been around ever since. Hosted for many years by former deejay Bob Eubanks (he can actually be heard on THE BEATLES LIVE AT HOLLYWOOD BOWL album), it was a new kind of game show with somewhat risque answers that became more so as time progressed.

The concept was that you had 4 newly married couples. The host asks the wives a question about their new husbands and then the husbands have to match what the wives answered. Hilarity naturally ensued and couple soften bickered on-air. Into the seventies, the questions became purposely a little more leading with the goal of getting embarrassing personal answers and the public ate it up.


THE NEWLYWED GAME has been revived a  number of times since the original run ended.
Posted by Booksteve at 8:10 AM