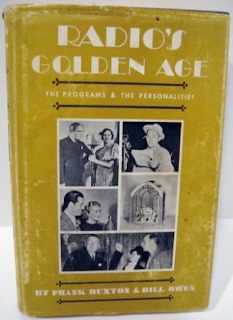 The last days of "old time radio" ended in 1961 with the final episodes of YOURS TRULY, JOHNNY DOLLAR and SUSPENSE. Radio was left with some talk and variety series but mostly music deejays. Oh, there were a few more attempts at dramatic radio such as 1965's THEATER FIVE but television had successfully brought the older medium to its knees.

Then along came Frank Buxton and Bill Owen with the book seen here, a nostalgic catalog of radio shows and stars from the twenties through the fifties. When the nostalgia boom hit big over the next few years, this book would be revised and rereleased as THE BIG BROADCAST and precipitate quite a bit of interest in the old shows, exciting many (including myself) for whom the passion of the now almost lost art form still burns.
Posted by Booksteve at 2:37 PM