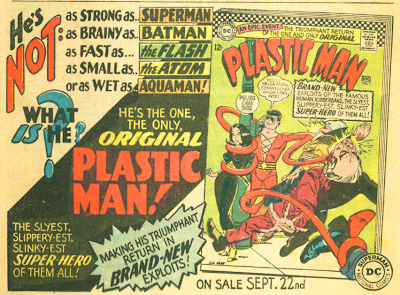 Jack Cole's PLASTIC MAN from Quality in the forties and early fifties was one of the most original and best drawn superhero strips of its day. It was popular enough to be parodied in an early issue of MAD. DC took on the rights to most Quality characters when that company went out of business in the mid-fifties but the only ones they kept going were BLACKHAWK and, I believe, a couple of the war titles. IW/Super put out a couple of legally dubious PLASTIC MAN comics after that and the character appeared in one DIAL "H" FOR HERO story but this 1966 title, initially with great Gil Kane art, was the first full attempt at a legit new series.
Posted by Booksteve at 1:27 PM