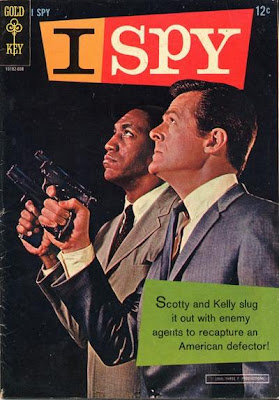 The obscure 1965 LOBO western comic book from Dell is generally considered to be the first mainstream comic book with an African-American hero but hot on its heels was the comic book adaptation of TV's ground-breaking black/white drama, I SPY.

I SPY's  first issue premiered in 1966 with very good art by Al McWilliams  (TWIN EARTHS) who would continue throughout most of the title's oddly sporadic run through 1968.
Posted by Booksteve at 2:17 PM