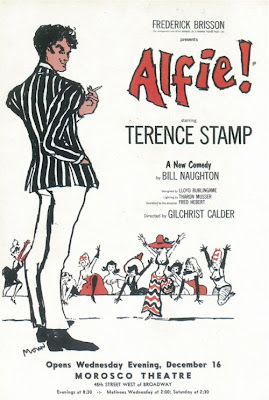 ALFIE was an adult comedy play about an inveterate womanizer. The lead was played onstage by actor Terrence Stamp, himself known for his relationships with famous women of the day.

Stamp passed on taking the role to film and his then-roommate Michael Caine got his big break because of it.

Stamp is perhaps best known today for his later roles as the iconic General Zod in the first two Christopher Reeve Superman movies and his the transexual Bernadette in THE ADVENTURES OF PRISCILLA, QUEEN OF THE DESERT.
Posted by Booksteve at 9:32 AM