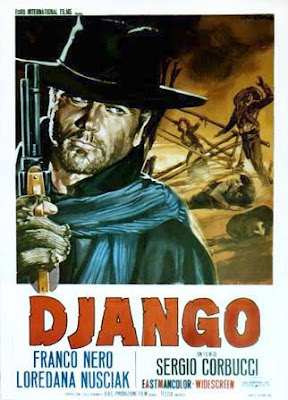 DJANGO wasn't the first so-called "spaghetti western" nor even the most popular. In fact, it mostly went unnoticed in the US, overshadowed by Clint Eastwood and Lee Van Cleef in Sergi0 Leone's THE GOOD, THE BAD AND THE UGLY.
With about a hundred "unofficial" sequels and one official one made two decades later, DJANGO may, however, be the most influential western of them all. Factor in the fact that actor Terrence Hill began in spaghetti westerns based initially on the fact that he looked like DJANGO star Franco Nero. Hill would go on to a long, successful international career that involved mostly light-hearted westerns and adventures.
The reason that a replacement star was even needed for Nero was that he was flown off to Hollywood to be Sir Lancelot in the huge budget big-screen
adaptation of the musical, CAMELOT! 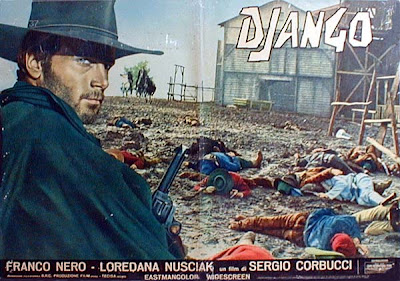 In CAMELOT, Franco Nero stole Vanessa Redgrave's heart from Richard Harris. Many years later, the two were wed in real life! Franco Nero revisited the Django character for the official sequel, DJANGO 2: IL GRANDE RITORNO in 1987.
The original story? Django is a dark, brooding gunfighter who travels from town to town dragging a coffin. Eventually we learn it carries a Gatling Gun. That's the important part. 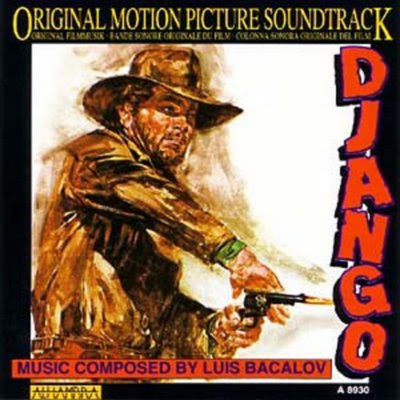 Posted by Booksteve at 6:09 PM