Slightly more adult-oriented than normal, the 1966 Jerry Lewis film
WAY...WAY OUT is nonetheless a silly comedy in which Jerry and Commie Stevens are the first American astronauts of different sexes to go to the moon. Personally, I've always found this funnier than most of the actor's sixties films and it led to me calling Jerry my favorite movie star for much of that period.

B movie veteran Gordon Douglas directs and Jerry practically plays it straight, leaving much of the funniest humor to others including Dick Shawn and Robert Morley. Of particular note are Dennis Weaver and Howie Morris as two astronauts who have been up in space a little too long.

Underneath all of the sci-fi silliness is sex as the Russians and the Americans both experiment with the concepts that it would entail on the moon and ultimately end up in a race to have the first space baby.

A catch theme sung by Jerry's son, pop star Gary Lewis, is a real earworm. The top-notch cast is rounded out with veterans such as Brian Keith, Anita Ekberg, Sig Rumann, Milton Frome, Alex D'Arcy and Fritz Feld as well as studio contract players Linda Harrison (later Nova in the Apes films) and James Brolin (later married to Barbra Streisand and father of Josh Brolin after a long and successful acting career). 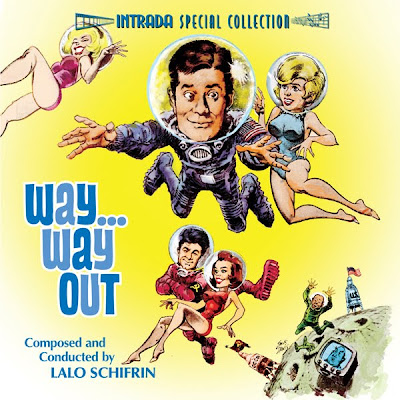 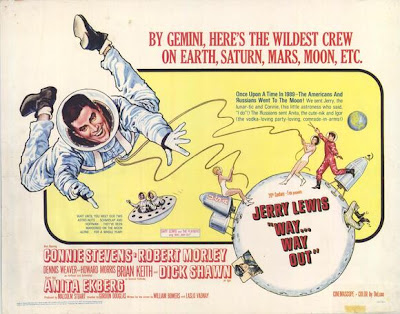 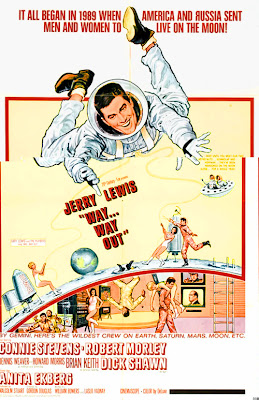 Posted by Booksteve at 7:01 AM