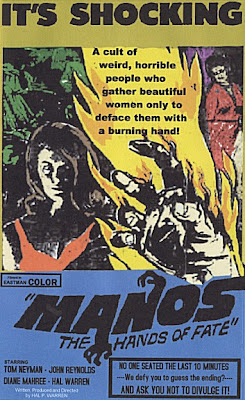 Pop culture wasn't ALL good in 1966. There was some that, in fact, was so BAD...that it turned out good. MANOS: THE HANDS OF FATE was an ineptly made regional horror film of the type often found being marketed direct-to-DVD today. It had no known actors and even the local guy who played the "monster" character committed suicide before the film's premiere!

That said, it was rediscovered as a cult classic on a now-famous episode of MYSTERY SCIENCE THEATER 3000 in 1993! For much more info, check out the movie's Wikipedia page!
Posted by Booksteve at 10:41 AM