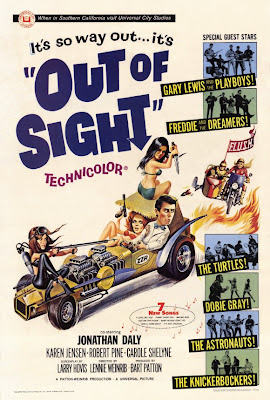 Both a Bond spoof and a Beach Party comedy, OUT OF SIGHT is a fun and funny '66 comedy starring the personable Jonathan Daly as a secret agent's butler mistaken for a super-spy. Customized cars by Batmobile designer George Barris play a large role and there are musical guests a-plenty including The Turtles, Freddie and the Dreamers, Gary Lewis and the Playboys and Dobie Gray.
The film was written by future HOGAN'S HEROES co-star Larry Hovis and, in fact, has another future star of that show, Richard Dawson, in a small role. The director was legendary Lennie Weinrib, a stand-up comic and voice-actor who, among other things, played HR PUFNSTUF (the voice anyway. He wasn't in the suit.).
Tying together my recent posts here, Wende Wagner appears in OUT OF SIGHT. Also, according to IMDB, as unlikely as it seems, Daly's one film appearance before this was in an early DJANGO sequel. Yeah. Sure. 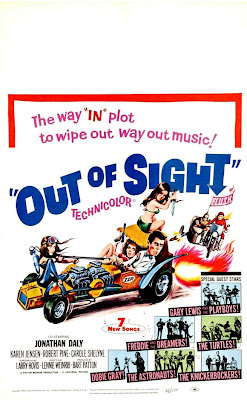 Posted by Booksteve at 6:22 AM