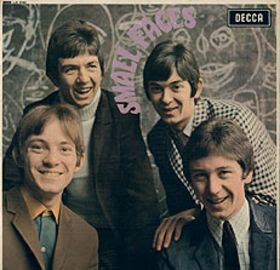 The Small Faces made their Mod debut in 1966 with this self-titled album. Steve Marriott, Ronnie Lane, Ian McLaglen and drummer Kenny Jones (later with the Who) were the main group members. In 1969, after a string of UK hits including "Itchycoo Park" (with its undeniable drug lyrics) and the classic concept album OGDENS' NUT GONE FLAKE, Marriott was replaced by singer Rod Stewart and guitarist Ron Wood (both after leaving The Jeff Beck Group) and the group was renamed simply Faces.

Posted by Booksteve at 8:52 AM