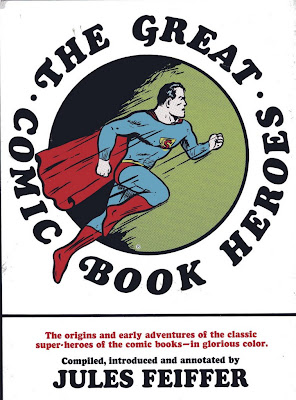 Although published in 1965, Jules Feiffer's THE GREAT COMIC BOOK HEROES continued to sell throughout '66 and even beyond due to the boost it received from Batmania!

The book offered the author's quirky take on comic book history--surprisingly making little or no mention of his own role in it as I recall-- but, even better, Golden Age reprints of, among others,  Batman, Superman, Captain America, The Sub-Mariner, the Spectre and The Spirit!
Posted by Booksteve at 6:53 AM