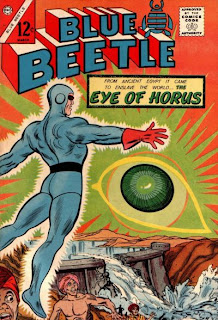 Seen above is the Feb/March '66 issue of Charlton's BLUE BEETLE, a title and character that had bounced around from one publisher to another for more than 25 years. Drawn by the much-maligned art team of Bill Fraccio and Tony Tallarico, it is often cited as one of the worst comic books of its day if not of all time.

That issue turned out to be the final issue...until Steve Ditko, recently estranged from Marvel, returned to Charlton and before the end of 1966 had completely redesigned the character in his own inimitable style, as seen here for his debut as a back-up strip in CAPTAIN ATOM. Soon enough, he would get his own title again and it would be Ditko's version on which Alan Moore and Dave Gibbons based WATCHMEN'S Night Owl. 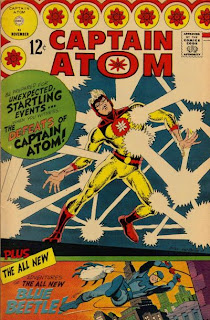