The Sounds of Silence-Simon and Garfunkel 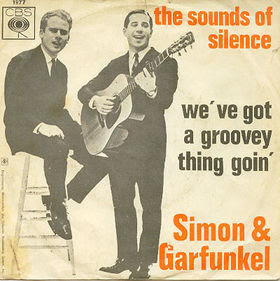 Although they had recorded quite a few rock and roll records in the late fifties as TOM & JERRY, none were really very successful. Reinventing themselves as a folk group in the early sixties didn't really work either. Then in '66, producer Roy Hallee added an electric guitar behind their already released recording of THE SOUNDS OF SILENCE (later retitled in the singular). The next thing you know, Paul's poetic lyrics and Artie's angelic voice became a combination that defined the sixties.
Posted by Booksteve at 2:37 AM