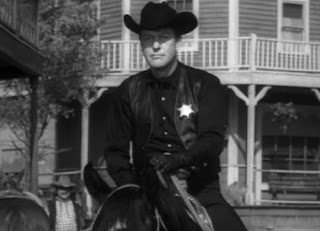 The penultimate episode of the classic early sixties sitcom, THE DICK VAN DYKE SHOW, was THE GUNSLINGER, a hilarious spoof of Western TV series conventions. The script, by  , offers some of the funniest lines of the whole series. Very much played out in a MAD magazine style, Rob is the sheriff without guns (he can't find them) with Buddy as his deputy, Sally as the dance hall hostess, Laura his wife and Carl Reiner as Big Bad Brady! We also get one gag shot outdoors--the only time that was ever done on this series. It was shot on the neighboring GUNSMOKE set. The script of THE GUNSLINGER is by Bill Persky and Sam Denoff, both of whom cameo as cowboys (along with Gary Marshall who cameos as a bartender). Co-star Jerry Paris directs.