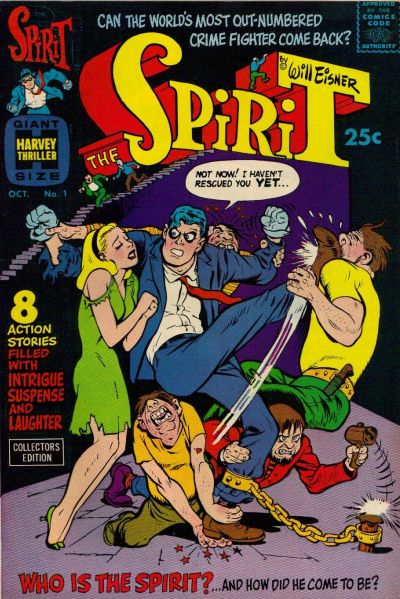 The last SPIRIT stories had appeared more than a decade earlier by the time Harvey Comics, home of CASPER and RICHIE RICH, came out with this collection in '66. It followed on the heels of a few questionably legal reprints from IW/Super, a surprise appearance in Harvey Kurtzman's HELP, prominent exposure in Jules Feiffer's THE GREAT COMIC BOOK HEROES and an all-new Eisner story in a 1965 New York newspaper. This, though, was the one the kids saw. This was the one that made Eisner and Spirit fans out of the baby Boomer kids and led to the dozen other revivals of this great, classic strip!

I first saw it at my friend Greg's house that summer and I didn't know what to make of it. It was unlike anything I'd seen before in comics in all my..what?...6 months?...of collecting. I wasn't sure I liked it. But it made an impression. And I remembered it when it was revived and have been a fan ever since. Today would have been Will Eisner's birthday. His SPIRIT, to use the obvious line, lives on.
Posted by Booksteve at 6:15 PM