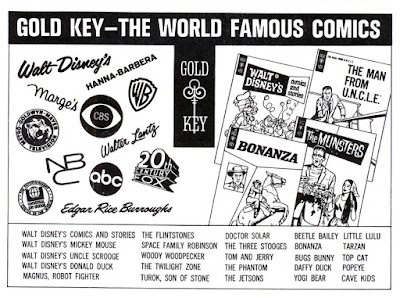 The superhero race of the 1960s left Marvel and DC vying for top position and all of the other remaining comic book companies in their dust. Gold Key, though remembered as an also-ran, was actually the successor to Dell Comics, at one time the most successful comics company of them all. It's kind of complicated because there actually still WAS a Dell Comics. too, but in essence they were created new by Dell when Western Publishing--the company that had been packaging their comics all along--split away from Dell to go out on their own under the Gold Key logo. Gold Key created many memorable comics of their own from that point but also inherited--as promoted in this ad--many of the familiar licenses previously held by Dell. The '60s version of Dell would struggle on to the early '70s while Gold Key would remain fairly successful for a decade or more beyond that before Western gave up comics to concentrate on its popular children's line of Golden Books.

Posted by Booksteve at 3:32 PM